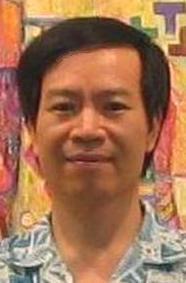 Shanye Huang was born and raised in a Zhuang Ethnic family in Guangxi, Southwest China; a region known for its vibrant folk arts. He has maintained a lifelong fascination with the power, mystery and beauty of Chinese folk arts and culture. In 1981, Huang graduated with a major in Fine Art from Guangxi Arts Institute of China. In 1985, at an age of twenty-six, Huang was inducted into the most prestigious art organization in China, the China Artists Association. In 1988, he completed his advanced graduate study in the Central Academy of Fine Arts in Beijing. From 1985-1993, Huang taught painting and drawing as an assistant professor/lecturer in the Guangxi Arts Institute.

In 1993, after completing his solo exhibition in England, Shanye Huang came to the United States at the invitation of the Center for International Art & Culture in New York, and later the Exhibition Committee of California State University, Northridge (CSUN) to hold a solo exhibition.  However, due to the Northridge earthquake, the show was postponed until 1998. Huang was then granted a permanent visa to stay in the United Sates under an outstanding artist status.  He currently lives and works in Washington DC Metropolitan area.

In 2004, Huang's work Echo was selected by CSUN Professor and well-known artist Kim Abeles as a part of the permanent Public Art installation in the Civic Center of San Fernando Valley, Los Angeles, California. His work Tapestry of Dreams inspired American conductor and composer Silas Huff to create a 25-minute dance symphony, Chun Zhi Ge.  Accompanied by the Astoria Symphony and using Huang's artwork as a backdrop, the Ballet Repertory of New York City and the Long Island City Ballet brought the charming story to life at the LaGuardia Performing Arts Center in New York City in March 2009. Again, in October, 2011, the Troupe were invited to perform an adapted section of the Ballet in the 13th Nanning International Folk Song Arts Festival along with the 8th China-ASEAN Expo.

In May, 2011 Shanye Huang’s work Blessing was selected to be in the exhibition "On Being Human" from nearly a thousand entries representing over 30 distinct cultures from 50 different countries across several centuries, and was on view with many renowned contemporary artists representing five continents as well as such stalwarts as Warhol, Dali, Rockwell, Tissot, Whistler and Rembrandt. In Sept. 2012, his work "The Trees and Vines Intertwine #5 " won the Award of Excellence in the an "International Exhibition of Overseas Chinese Paintings & Calligraphy" held at the National Museum of China in Beijing, China.

Shanye Huang's art has earned him many national and international awards and has been collected by museums, galleries as well as private collectors. His work has been widely shown, including the International Museum of Art in Taxes, Andrew Art Museum in North Carolina, Tampa Museum of Art in Florida, Brazilian Museum of Sculture-MuBE in Sao Paulo, Brazil, NDEXG Gallery/Museum in Toronto, Canada, the National Fine Art Museum of China in Beijing, Hillyer Art Space at Washington DC and the New York Art Collection in New York. Huang’s solo exhibitions have been shown in Asia, Europe and North America.